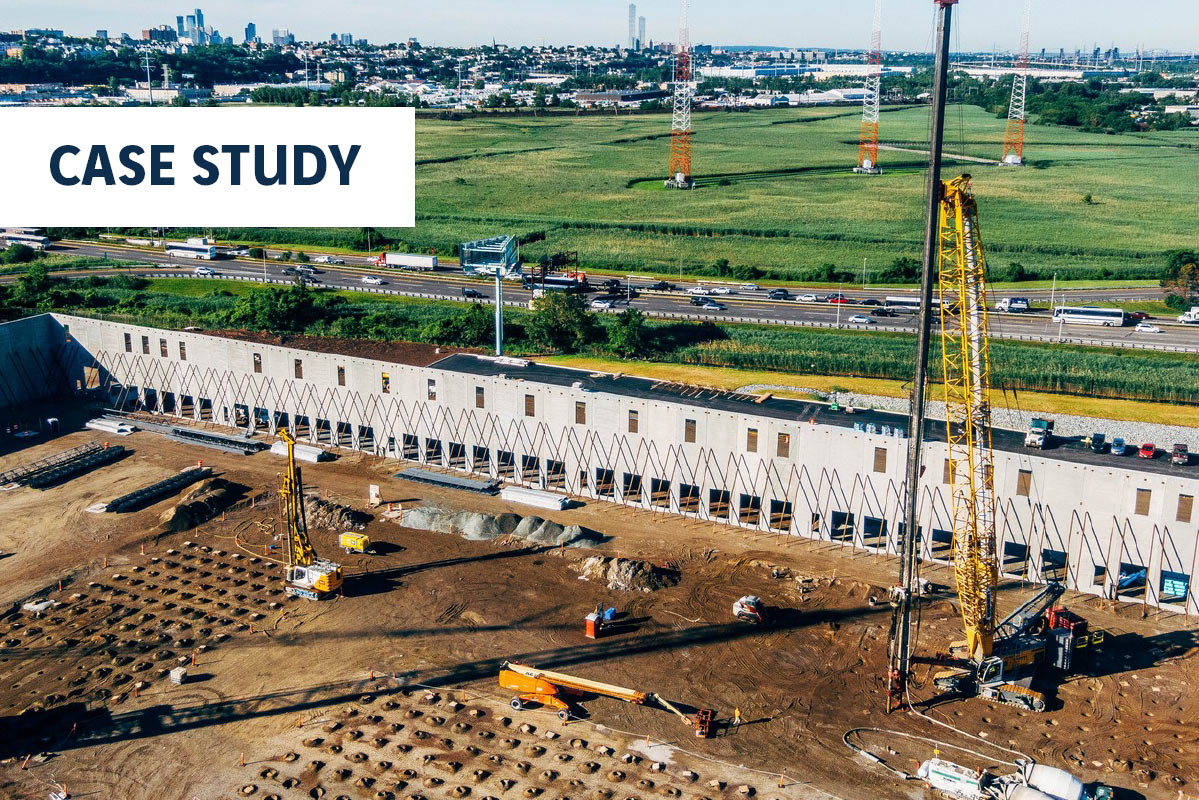 In the early 1960’s, Daffy’s, Inc. emerged as a prominent discount apparel and accessory retailer in the Northeast. It was primarily recognized as an inexpensive provider of stylish clothes. After more than 50 years in business, it closed in 2012, leaving as many as 19 vacant properties, including buildings/warehouses. One of the properties located off Route 3 in Secaucus, NJ, was selected by Lincoln Crossing LLC for re-development. After multiple proposals and various plans, approval for a new, one-story warehouse at the 20-acre site was granted. The plan included the demolition of the former Daffy’s warehouse and replacement with a larger one totaling nearly 350,000 sq. ft. The new warehouse would be 38 percent larger than the previous building.

The ground conditions were characterized by up to 10 ft of dense sandy fill, underlain by 3 ft of soft organics. Beneath the organics was a very soft saturated clay to depths up to 155 ft, which was underlain by very dense glacial till. Due to the soft and compressible nature of the soils at the site, along with dense fills near the surface, multiple developers opted against building at this location. The concern was high costs associated with piling and structural slabs that would be required to support the structure.

To minimize foundation costs, Menard USA proposed a ground improvement solution in lieu of deep foundations. The selected technique was Controlled Modulus Column (CMC)® rigid inclusions. Menard’s CMC design would support column footings, wall footings and slab on grade. Column loads of 120 kips, wall loads of 8 kips per ft, and floor loads of 800 psf were considered in the design. The alternative approach allowed the developer to utilize spread and strip footings, with a slab on grade, significantly reducing the amount of concrete and steel in the foundation system. Menard’s design was selected over the deep foundation option and a contract was issued for the complete ground improvement under the proposed warehouse. The project proved to be unique for Menard in that it was the deepest installation of CMCs to date. Menard installed a total of 5,100 CMCs to average depths of 155 ft and maximum depths of 172 ft. Due to the dense fills near the surface, Menard performed air rotary predrilling with a BG15 and 750 cfm air compressor to loosen the upper 15-20 ft of soil. CMCs were drilled from an elevation of +8 ft. from a working platform composed of Dense Graded Aggregate (DGA). All CMC work was completed using a crane with leads, a necessity in achieving the significant depths. The project settlement requirement was 2-in total with a ¾ in of differential settlement.

Another unique challenge to the project was the site’s proximity to three AM radio stations. The radio frequency (RF) from the stations created an electrical current in the CMC mast, which caused a work hazard and forced a one-month shutdown. To resolve the issue, a RF consultant provided an alternate grounding system. To regain lost schedule, Menard mobilized a second drill setup to the site. Despite the challenges, Menard successfully installed 5,100 CMCs to record depths to support the 350,000 sq. ft warehouse in Secaucus, NJ