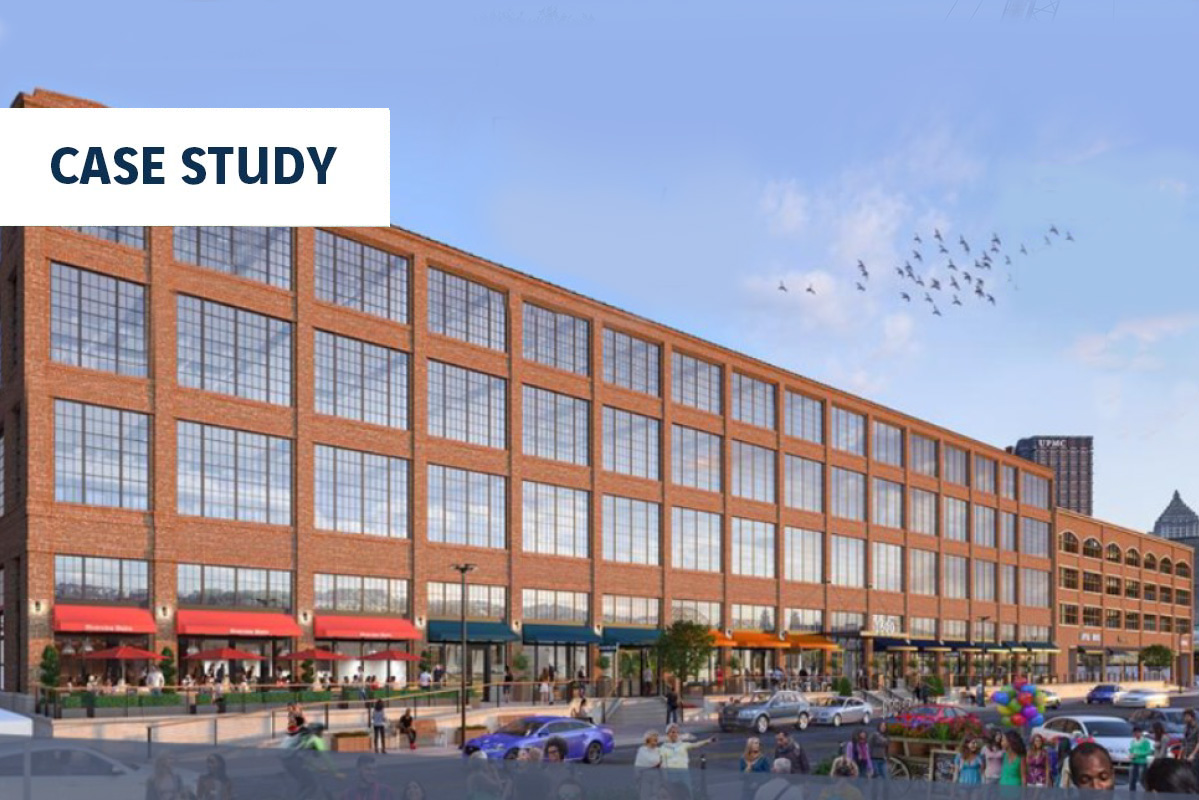 Along an iconic corridor that once served as a hub for wholesale produce in Pittsburgh, the proposed Smallman St. and Produce Terminal Project & Condos – at 1600 Smallman Street — were designed to pay homage to a former bustling section of the city. Described as “industrial chic,” the endeavor aimed to enliven the west end of Pittsburgh’s Strip District (between 16th and 21st Streets) by creating a safer and more engaging destination. Included was the proposed addition of 160,000 sq ft of mixed-use commercial and retail space, along with 40,000 sq ft for local and regional businesses and a “food-centric” marketplace.

For decades, the Produce Terminal was the entry point for the region’s wholesale produce industry. Produce would arrive on railcars to be purchased by wholesalers who would sell to local restaurants and grocery stores. The Produce Terminal’s utility waned as the economics of food changed, and by the 1970s, the building was partially vacant. The building was eventually purchased by the Urban Redevelopment Authority (URA) of Pittsburgh in 1981. After several attempts at redevelopment stalled, the URA reached an agreement with McCaffery Interests, Inc. in 2014.

Two essential components of the project — the construction of a five-story garage and new stair and elevator towers in the existing building — required ground improvement due to the compressible nature of the soils at the site. Menard USA was contracted to support the garage with Controlled Modulus Column (CMC)® rigid inclusions. The technique used for the stair and elevator towers was helical piers.

The soils contained urban fill extended to depths of 10 to 14 ft across the site. Natural soils encountered beneath the fills consisted of soft to stiff lean clay over a medium dense sand with gravel.

or the garage, auger cast piles were originally considered for foundation support. However, Menard provided an economical and time-saving solution with CMC rigid inclusions. The CMCs eliminated the need for handling and removing large amounts of spoils generally created through the process of auger cast piles. The CMCs also terminated at an average depth of 35 ft – 30 ft less than the predicted average for auger cast piles.

Menard’s solution included the use of 136 CMCs that were installed beneath the spread and strip footings to a maximum depth of 50 ft.

For the stair and elevator towers in the existing building, 87 helical piers were installed to a maximum depth of 65 ft. The design provided for maximum settlement of ½ in.
Because work was done in an urban setting (which included an existing building at the site) space and maneuverability was limited. Noise, vibrations and general impact from construction also had to be kept to a minimum. Menard deftly navigated through these challenges, meeting the client’s requirements for quality, safety and schedule.