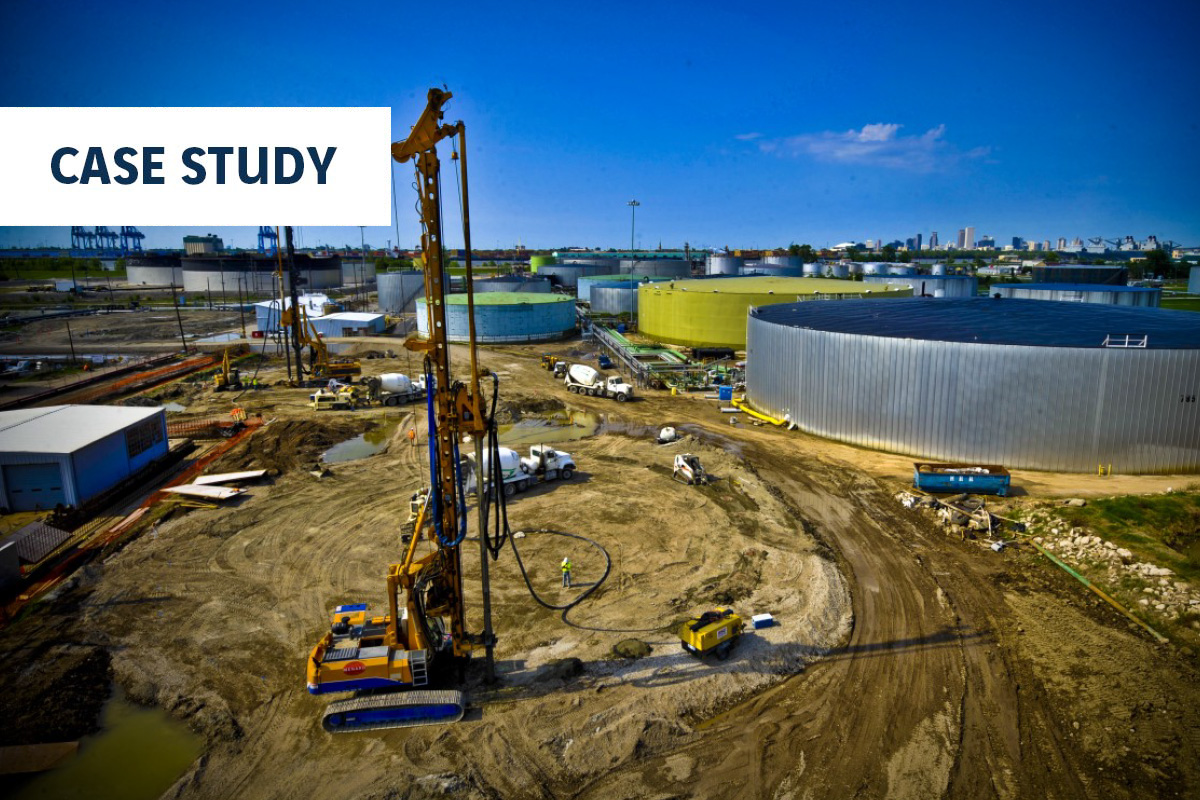 The confidential client announced plans to invest $85 million in new capital projects to expand its marine terminals in three locations. At its site in Marrero, LA, which is located near New Orleans along the banks of the Mississippi River, the client embarked on the construction of five new storage tanks with related terminal infrastructure. The tanks would range in diameter from 130 to 148 ft and have a storage height of 42 ft. The construction of the tanks would enable the facility to expand its storage capacity for fuel oil or asphalt by 550,000 barrels. The tank shell and floor would be made of steel.

The client had concerns of differential settlement, high surface loads, a focus on the nearby community and noise control, and an accelerated project schedule that Menard USA had to contend with.

Given the considerable storage capacity of the tanks, and considering the variable nature and compressibility of the soils, significant settlement was predicted unless ground improvement was provided

The site was characterized by Holocene deposits that overlie Pleistocene Age soils. Below a surficial layer of 0.5 to 4 ft of fill (clayey silt, silty sands, and gravel), natural levee deposits extended to a depth of 13 to 20 ft. Underlying these deposits, to a depth ranging between 65 and 80 ft below the existing ground surface were deposits of interdistributary deposits of very soft clay with silt and sand. Below these interdistributary deposits, to depths of up to 105 ft, nearshore guld deposits consisting of medium stiff to stiff clay with fine sand pockets and shell fragments. Older deposits are found below the more recent deposits and consist of stiff to very stiff silty to sandy clays over a very dense layer of silty sands at depth of 115 to 120 ft. Due to the site’s proximity to the Mississippi river, the water table while fluctuating with the river levels, was observed 2 to 3 ft below the ground surface.

An initial design recommended the use of deep driven piles to mitigate settlement. In that approach, a thick steel-reinforced concrete pile cap was foreseen. A ground improvement alternative using Controlled Modulus Column (CMC)® rigid inclusions was proposed to reduce the project costs while maintaining acceptable levels of post-construction settlements. Consequently, 18 in CMCs were installed through the Holocene deposits into the Pleistocene deposits with a maximum depth of 113 ft, while smaller diameter CMCs were installed to terminate in the shallower sand layer. Menard incorporated Mechanically Stabilized Earth (MSE) walls to confine granular load transfer platform LTP material and provide a bearing surface for each tank. The ground improvement was completed in one continuous phase, with 2,400 CMCS installed to depths ranging from 70 to 113 ft below the five tanks, and 2,300 lf of reinforced earth confinement ring walls.